The Fourth annual Ride for Mom is Cancelled 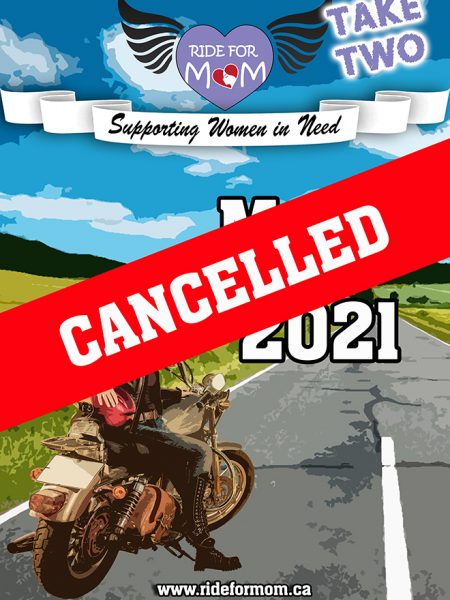 It it with heavy hearts that we must inform you The Fourth Annual Ride for Mom: Take Two has been cancelled. Due to the current AHS restrictions, we could not safely arrange stops for our riders.

We hope for better things in 2022, and to try once again. Take care, stay safe, and happy riding.

Find out the latest news from the Ride for Mom. Don’t forget that the Fourth Annual Ride for Mom is taking place at Blackjacks Roadhouse & Games Room in Nisku on Saturday, Saturday, May 7th, 2022.

Here is the latest news from the Ride for Mom

Cheque Presentation for the 2017 Ride for Mom 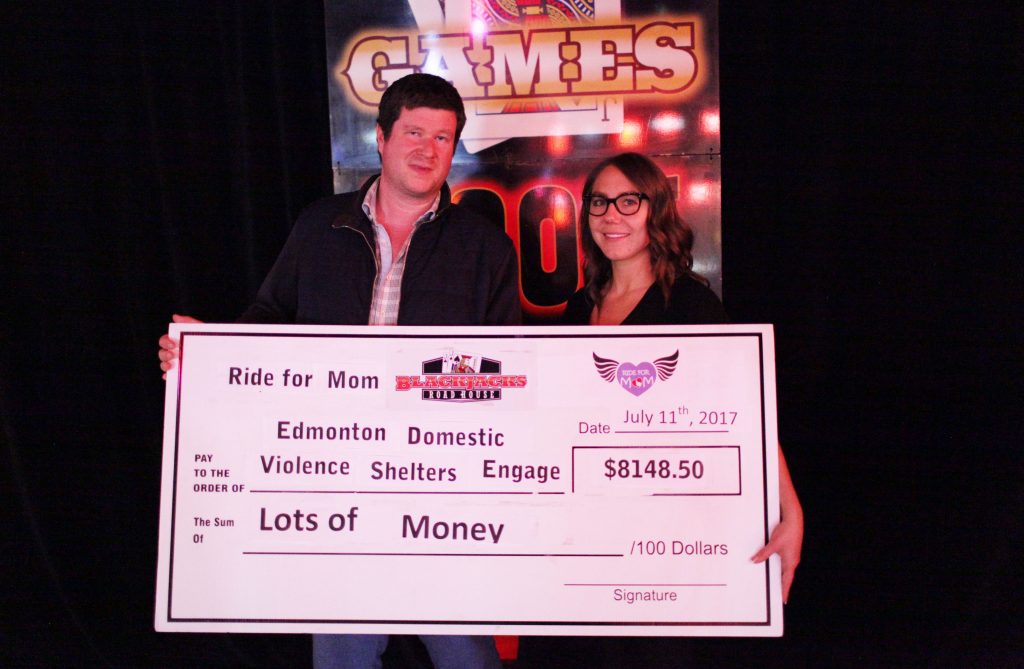 The latest news from the Ride for Mom is that on Tuesday, July 11th, Krysta Shields of Blackjacks Roadhouse & Games Room presented Eoin Murray of the Alberta Council of Women’s Shelters (member of EDVSE) with a whopping cheque for $8148.50 that was raised during the inaugural Ride for Mom on May 13th. Although it was a soggy and chilly day, many brave riders came out to Blackjacks in support of a great cause. Let’s make the 2018 Ride for Mom even better, so we can help even more people in need.

From all of us here at the Ride for Mom, we would like to send out a big thank you to all of you who registered, made donations, came on the ride, and helped us get the inaugural Ride for Mom off the ground to make it a success. We would especially like to thank our volunteers, who donated their time behind the scenes and at the stops to ensure we had a safe and successful ride.

The Latest News from Around the Province

Domestic violence on the rise in Edmonton

Shelters are full, counselling wait lists are at a breaking point and criminal charges continue to climb as Edmonton faces rising domestic violence.

Around 70 per cent of YWCA counselling clients are women facing domestic violence issues. By September last year, its counsellors had surpassed the number of people they saw in all of 2015, with total appointments climbing to 3,300 from 2,700.

More worryingly, the number of sessions for which clients couldn’t afford to pay a cent almost tripled in 2016, to 651.

“Our counselling centre has never seen this many people before … and that’s anxiety-producing for all of us,” Foord says.

Clients in crisis are dealt with as soon as possible, but otherwise the wait for YWCA counselling services has reached 16 weeks.

But phones don’t stop ringing because of a four-month wait, and clients are asking to be added to the list in case a slot opens up.

There’s also a record wait at Edmonton’s Lurana Shelter. It accommodates women and children who are fleeing domestic violence and helped 3,267 clients in 2015-16.

“We try to get people in as quickly as possible, but … we are having to turn people away,” says executive director Janine Fraser.

According to justice ministry figures, the number of criminal charges for intimate partner violence in Edmonton rose to 2,336 last year from 1,955 in 2011.

That reflected a trend across Alberta’s seven largest urban centres, where total charges increased to 7,751 last year from 6,368 in 2011.

The government earmarked an extra $15 million for women’s shelters and $25 million for family and community support services in Budget 2017, but non-profits face a serious cash crunch.

But fundraising in Alberta’s present economic climate is tough.

Fraser says finding larger donations is particularly difficult, and the shelter is taking a critical look at all of its fundraising efforts.

Foord doesn’t expect the government to appear at the door with a wad of cash, but would like greater recognition of the key role non-profits play in delivering mental-health services and supports to people dealing with trauma and violence.

Falling through the cracks

Justice Minister Kathleen Ganley agrees with Foord and Fraser that the numbers could partially reflect an increase in women seeking help thanks to the decreased stigma around domestic violence.

But she’s still concerned, and says the province must continue investing in support services and shelters, despite Alberta’s economic challenges.

“We can’t let whether or not a survivor of domestic violence is going to get help be dependent on whether … the price of oil is low or high,” Ganley says.

Still, Foord worries — about her staff, who are hearing more stories of violence each day, and about the people who call and end up on a wait list

“If you can’t get help when you need it, you can go back to old patterns,” she says.

“You may go back home, you may do something desperate and unsafe to extricate yourself from that situation.”

Ladies and gentlemen, it's official. The Ride for Mom has partnered with the Edmonton Domestic Violence Shelters Engage and the six Edmonton shelters under their umbrella for the inaugural Ride for Mom to be held on May 13, 2017. Blackjacks Road House & Games Room is proud to host riders from all walks of life to raise funds for such a great cause. See you all out there on the Mother's Day weekend.